ClearML Task lies at the heart of ClearML's experiment manager.

A Task is a single code execution session, which can represent an experiment, a step in a workflow, a workflow controller, or any custom implementation you choose.

To transform an existing script into a ClearML Task, one must call the Task.init() method and specify a task name and its project. This creates a Task object that automatically captures code execution information as well as execution outputs.

All the information captured by a task is by default uploaded to the ClearML Server and it can be visualized in the ClearML WebApp (UI). ClearML can also be configured to upload model checkpoints, artifacts, and charts to cloud storage (see Storage). Additionally, you can work with tasks in Offline Mode, in which all information is saved in a local folder (see Storing Task Data Offline).

In the UI and code, tasks are grouped into projects, which are logical entities similar to folders. Users can decide how to group tasks, though different models or objectives are usually grouped into different projects.

Tasks that are in the system can be accessed and utilized with code. To access a task, it can be identified either by a project name & task name combination or by a unique ID.

It's possible to copy (clone) a task multiple times and to modify it for re-execution.

The sections of ClearML Task are made up of the information that a task captures and stores, which consists of code execution details and execution outputs. This information is used for tracking and visualizing results, reproducing, tuning, and comparing experiments, and executing workflows.

To view a more in depth description of each task section, see Tracking Experiments and Visualizing Results.

ClearML logs a task’s hyperparameters specified as command line arguments, environment or code level variables. This allows experiments to be reproduced, and their hyperparameters and results can be saved and compared, which is key to understanding model behavior.

Hyperparameters can be added from anywhere in your code, and ClearML provides multiple ways to log them. If you specify your parameters using popular python packages, such as argparse and click, all you need to do is initialize a task, and ClearML will automatically log the parameters. ClearML also provides methods to explicitly report parameters.

When executing a task through a ClearML agent, the ClearML instrumentation of your code allows for using the ClearML UI to override the original specified values of your parameters.

ClearML allows easy storage of experiments' output products as artifacts that can later be accessed easily and used, through the web UI or programmatically.

ClearML provides methods to easily track files generated throughout your experiments’ execution such as:

ClearML provides an explicit logging interface that supports manually reporting a variety of artifacts. Any type of artifact can be logged to a task using the Task.upload_artifact method. See more details in the Artifacts Reporting example.

ClearML can be configured to upload artifacts to any of the supported types of storage, which include local and shared folders, AWS S3 buckets, Google Cloud Storage, and Azure Storage. For more information, see Storage.

Artifacts that have been logged can be accessed by other tasks through the task they are attached to, and then retrieving the artifact with one of its following methods:

Tasks have a type attribute, which denotes their purpose (e.g. training / testing / data processing). This helps to further organize projects and ensure tasks are easy to search and find. Available task types are:

ClearML Tasks are created in one of the following methods: 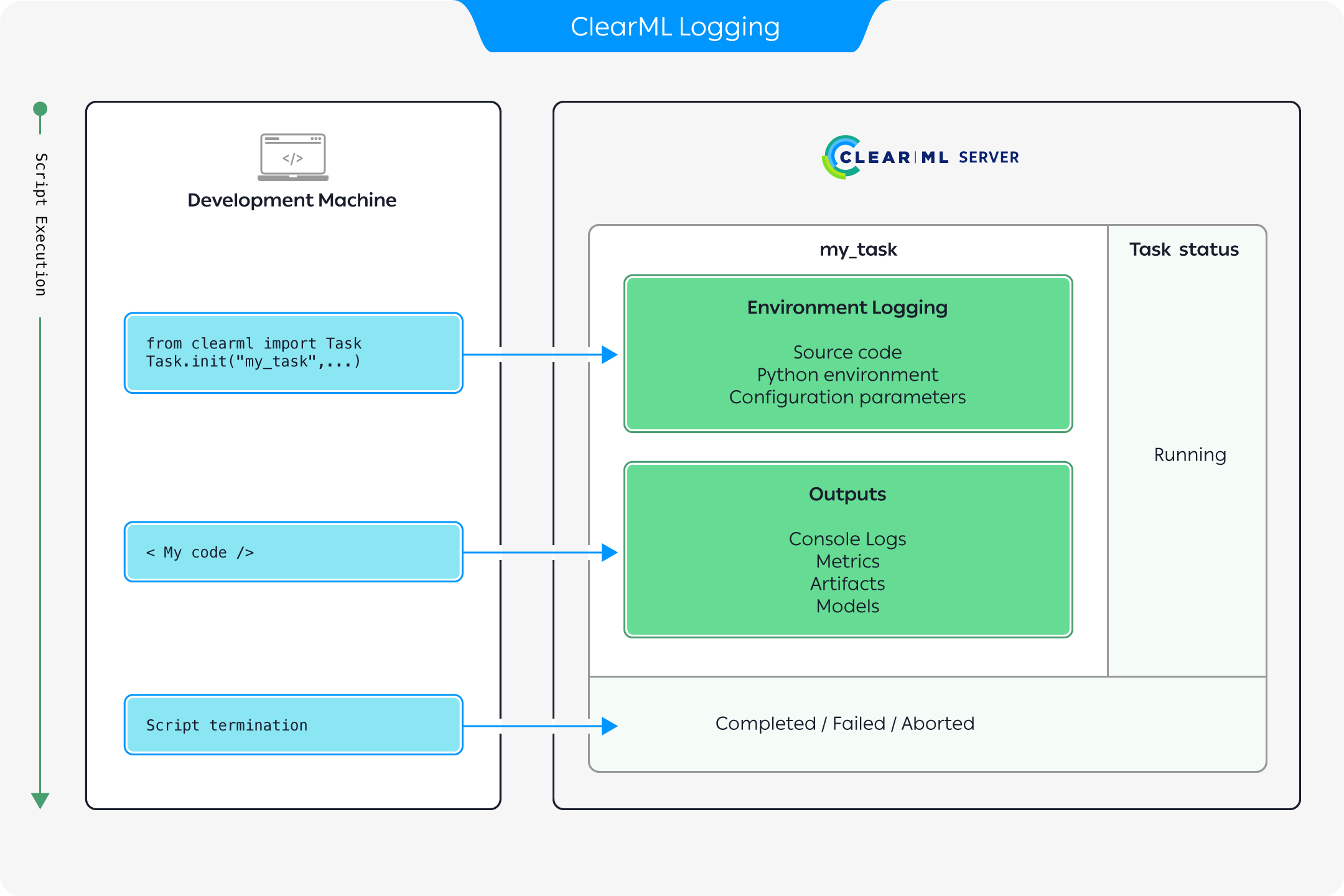 The above diagram describes how execution information is recorded when running code instrumented with ClearML:

All information logged can be viewed in the task details UI. 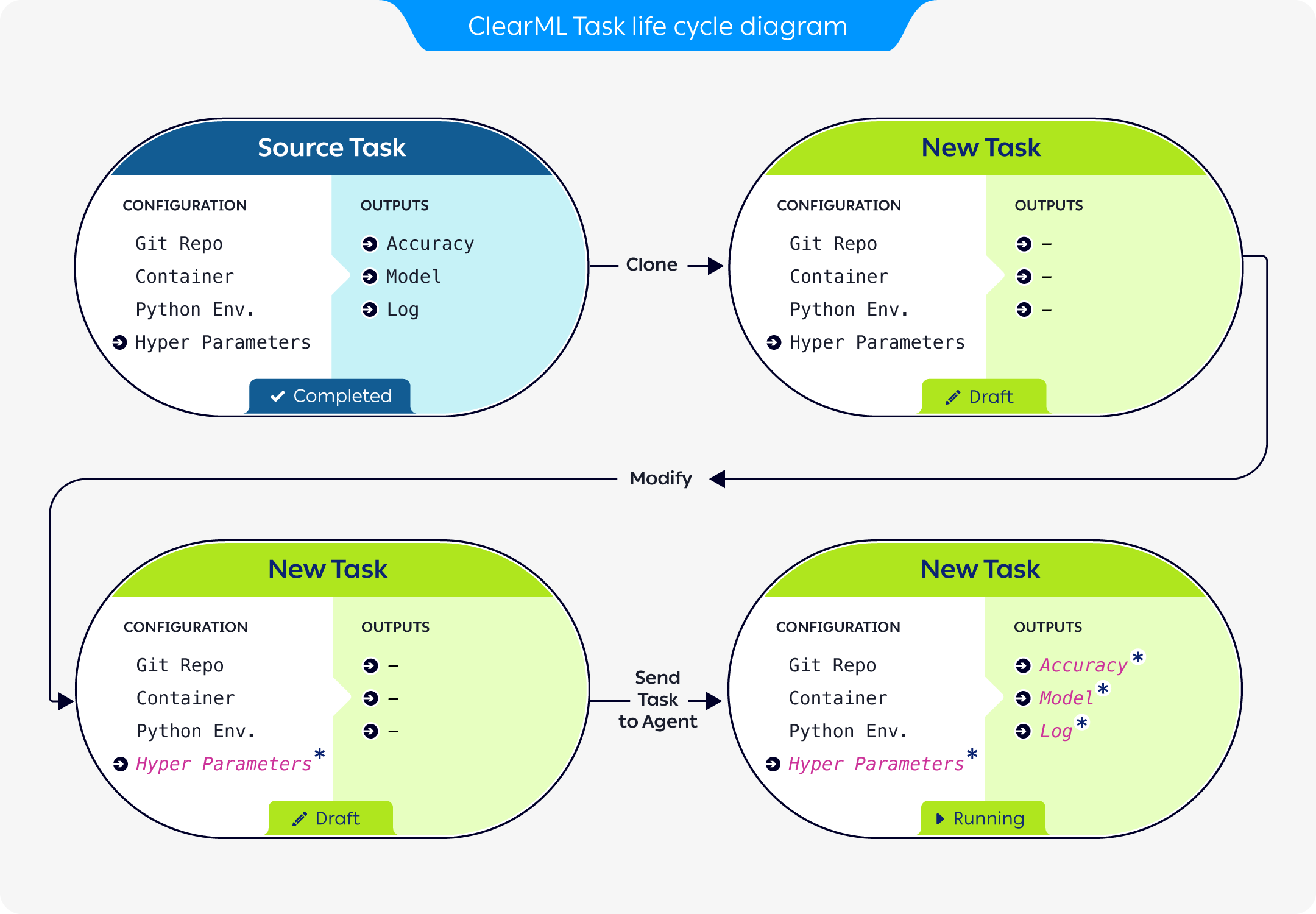 The above diagram demonstrates how a previously run task can be used as a baseline for experimentation:

The state of a task represents its stage in the task lifecycle. It indicates whether the task is read-write (editable) or read-only. For each state, a state transition indicates which actions can be performed on an experiment, and the new state after performing an action.

The following table describes the task states and state transitions.

See the task SDK interface for an overview for using the most basic Pythonic methods of the Task class. See the Task reference page for a complete list of available methods.