The following page provides an overview of the basic Pythonic interface to ClearML Tasks.

Task.init is the main method used to create tasks in ClearML. It will create a task, and populate it with:

Once a task is created, the task object can be accessed from anywhere in the code by calling Task.current_task.

If multiple tasks need to be created in the same process (for example, for logging multiple manual runs), make sure to close a task, before initializing a new one. To close a task simply call Task.close (see example here).

When initializing a task, its project needs to be specified. If the project entered does not exist, it will be created on-the-fly. Projects can be divided into sub-projects, just like folders are broken into sub-folders.

After invoking Task.init in a script, ClearML starts its automagical logging, which includes the following elements:

To control a task's framework logging, use the auto_connect_framworks parameter of the Task.init method. Turn off all automatic logging by setting the parameter to False. For finer grained control of logged frameworks, input a dictionary, with framework-boolean pairs.

Every Task.init call will create a new task for the current execution. In order to mitigate the clutter that a multitude of debugging tasks might create, a task will be reused if:

It's possible to always create a new task by passing reuse_last_task_id=False.

A task can also be created without the need to execute the code itself. Unlike the runtime detections, all the environment and configuration details need to be provided explicitly.

While the task is running, the WebApp will show the task’s progress indication in the experiment table, next to the task’s status. If a task failed or was aborted, you can view how much progress it had made. 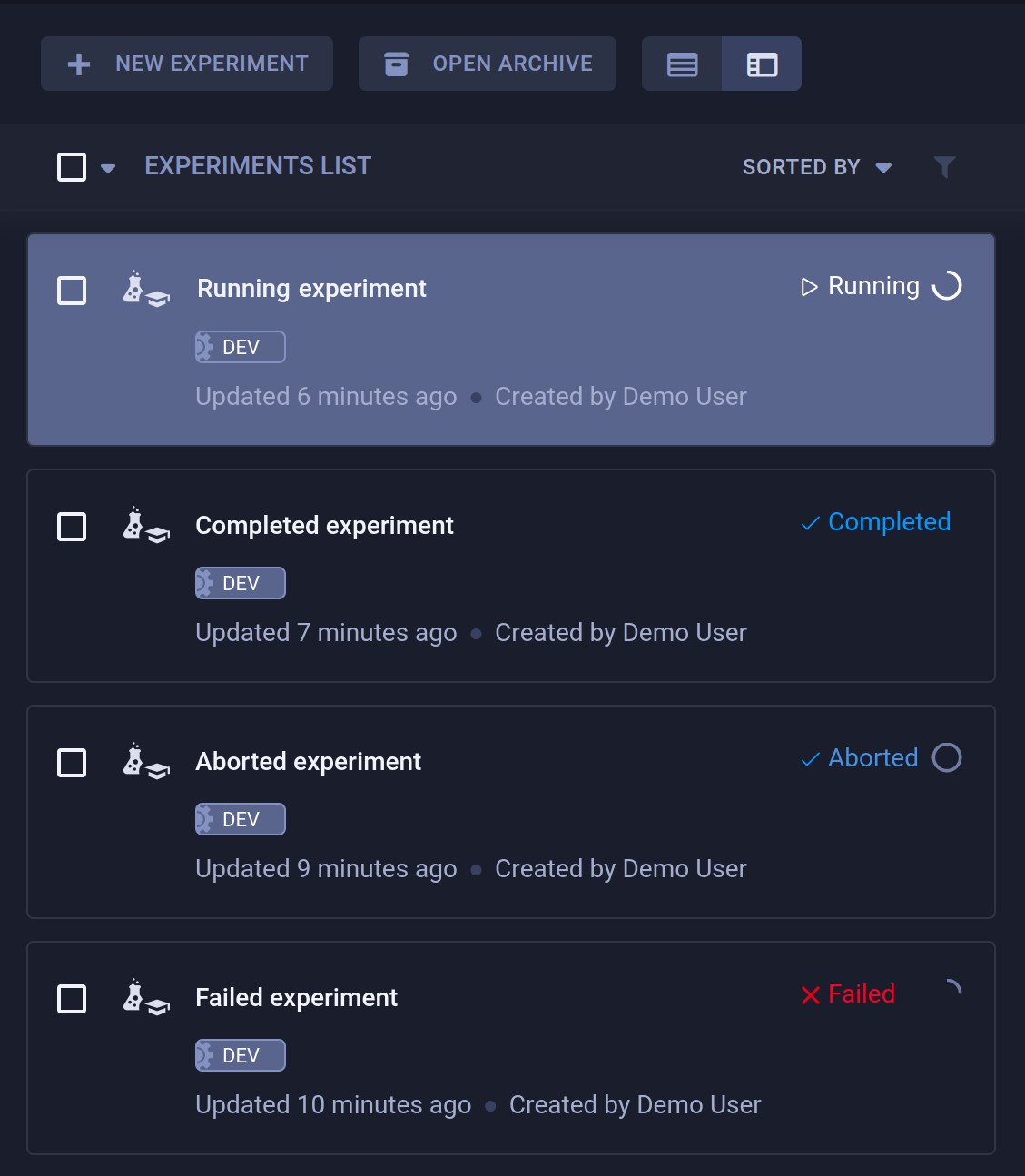 Additionally, you can view a task’s progress in its INFO tab in the WebApp.

A task can be identified by its project and name, and by a unique identifier (UUID string). The name and project of a task can be changed after an experiment has been executed, but its ID can't be changed.

Programmatically, task objects can be retrieved by querying the system based on either the task ID or a project and name combination using the Task.get_task class method. If a project / name combination is used, and multiple tasks have the exact same name, the function will return the last modified task.

Once a task object is obtained, it's possible to query the state of the task, reported scalars, etc. The task's outputs, such as artifacts and models, can also be retrieved.

Searching and filtering tasks can be done via the web UI and programmatically. Input search parameters into the Task.get_tasks method, which returns a list of task objects that match the search.

It's possible to also filter tasks by passing filtering rules to task_filter.

Once a task object is created, it can be copied (cloned). Task.clone returns a copy of the original task (source_task). By default, the cloned task is added to the same project as the original, and it's called "Clone Of ORIGINAL_NAME", but the name / project / comment (description) of the cloned task can be directly overridden.

A newly cloned task has a draft status, so it's modifiable.

Once a task is modified, launch it by pushing it into an execution queue with the Task.enqueue class method. Then a ClearML Agent assigned to the queue will pull the task from the queue and execute it.

A compelling workflow is:

Use the Task.execute_remotely method to implement this workflow. This method stops the current manual execution, and then re-runs it on a remote machine.

Once the method is called on the machine, it stops the local process and enqueues the current task into the default queue. From there, an agent can pull and launch it.

A specific function can also be launched on a remote machine with the Task.create_function_task method.

Arguments passed to the function will be automatically logged under the Function section in the Hyperparameters tab. Like any other arguments, they can be changed from the UI or programmatically.

Function tasks must be created from within a regular task, created by calling Task.init

You can work with tasks in Offline Mode, in which all the data and logs that the Task captures are stored in a local folder, which can later be uploaded to the ClearML Server.

Before initializing a Task, use the Task.set_offline class method and set the offline_mode argument to True. The method returns the Task ID and a path to the session folder.

from clearml import Task
# Use the set_offline class method before initializing a Task
Task.set_offline(offline_mode=True)
# Initialize a Task
task = Task.init(project_name="examples", task_name="my_task")
# Rest of code is executed. All data is logged locally and not onto the server

All the information captured by the Task is saved locally. Once the task script finishes execution, it's zipped.

Upload the execution data that the Task captured offline to the ClearML Server using one of the following:

Both options will upload the Task's full execution details and outputs and return a link to the Task's results page on the ClearML Server.

Artifacts are the output files created by a task. ClearML uploads and logs these products so they can later be easily accessed, modified, and used.

To log an artifact in a task, use the upload_artifact method.

See more details in the Artifacts Reporting example and in the SDK reference.

A task's artifacts are accessed through the task’s artifact property which lists the artifacts’ locations.

The artifacts can subsequently be retrieved from their respective locations by using:

The code below demonstrates how to access a file artifact using the previously generated preprocessed data:

The following is an overview of working with models through a Task object. It is also possible to work directly with model objects (see Models (SDK)).

To manually log a model in a task, create an instance of the OutputModel class. An OutputModel object is always registered as an output model of the task it is constructed from.

The snapshots of manually uploaded models aren't automatically captured. To update a task's model, use the Task.update_output_model method:

It's possible to modify the following parameters:

Models can also be manually updated independently, without any task. See OutputModel.update_weights.

Accessing a task’s previously trained model is quite similar to accessing task artifacts. A task's models are accessed through the task’s models property which lists the input models and output model snapshots’ locations.

The models can subsequently be retrieved from their respective locations by using get_local_copy() which downloads the model and caches it for later use, returning the path to the cached copy (if using Tensorflow, the snapshots are stored in a folder, so the local_weights_path will point to a folder containing the requested snapshot).

Notice that if one of the frameworks loads an existing weights file, the running task will automatically update its "Input Model", pointing directly to the original training task's model. This makes it easy to get the full lineage of every trained and used model in our system!

Models loaded by the ML framework appear under the "Input Models" section, under the Artifacts tab in the ClearML UI.

ClearML automatically captures the storage location of Models created by frameworks such as TF, Pytorch, and scikit-learn. By default, it stores the local path they are saved at.

To automatically store all created models by a specific experiment, modify the Task.init function as such:

To automatically store all models created by any experiment at a specific location, edit the clearml.conf (see ClearML Configuration Reference) and set sdk.developmenmt.default_output_uri to the desired storage (see Storage). This is especially helpful when using clearml-agent to execute code.

To define parameters manually use the Task.set_parameters method to specify name-value pairs in a parameter dictionary.

Parameters can be designated into sections: specify a parameter’s section by prefixing its name, delimited with a slash (i.e. section_name/parameter_name’:value). General is the default section.

Call the set_parameter method to set a single parameter.

The set_parameters method replaces any existing hyperparameters in the task.

To access all task parameters, use the Task.get_parameters method. This method returns a flattened dictionary of the 'section/parameter': 'value' pairs.

Access a specific parameter with the Task.get_parameter method specifying the parameter name.

ClearML can track Python objects (such as dictionaries and custom classes) as they evolve in your code, and log them to your task’s configuration using the Task.connect method. Once objects are connected to a task, ClearML automatically logs all object elements (e.g. class members, dictionary key-values pairs).

The above example sets the "backbone" property in a task.