ClearML Agent is a virtual environment and execution manager for DL / ML solutions on GPU machines. It integrates with the ClearML Python Package and ClearML Server to provide a full AI cluster solution.
Its main focus is around:

ClearML Agent executes an experiment or other workflow by reproducing the state of the code from the original machine to a remote machine. 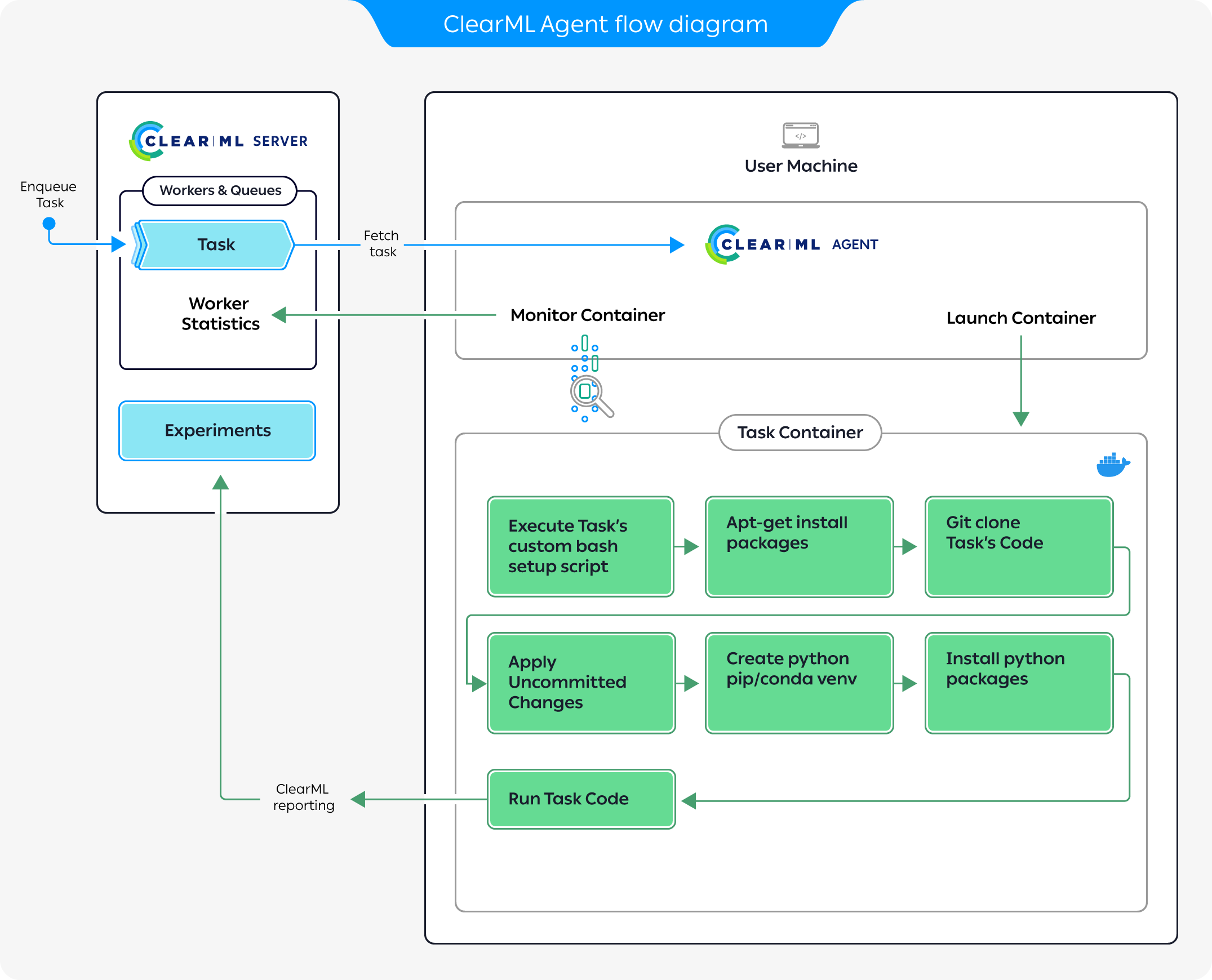 The diagram above demonstrates a typical flow where an agent executes a task:

While the agent is running, it continuously reports system metrics to the ClearML Server (These can be monitored in the Workers and Queues page).

Continue using ClearML Agent once it is running on a target machine. Reproduce experiments and execute automated workflows in one (or both) of the following ways:

If ClearML was previously configured, follow this to add ClearML Agent specific configurations

Install ClearML Agent as a system Python package and not in a Python virtual environment.

The ClearML Enterprise server provides a configuration vault, the contents of which are categorically applied on top of the agent-local configuration

In case a clearml.conf file already exists, add a few ClearML Agent specific configurations to it.

Spinning Up an Agent#

You can spin up an agent on any machine: on-prem and/or cloud instance. When spinning up an agent, you assign it to service a queue(s). Utilize the machine by enqueuing tasks to the queue that the agent is servicing, and the agent will pull and execute the tasks.

To execute an agent, listening to a queue, run:

To execute an agent in the background, run:

To stop an agent running in the background, run:

To specify GPUs associated with the agent, add the --gpus flag. To execute multiple agents on the same machine (usually assigning GPU for the different agents), run:

To allocate more than one GPU, provide a list of allocated GPUs

A single agent can listen to multiple queues. The priority is set by their order.

This ensures the agent first tries to pull a Task from the high_q queue, and only if it is empty, the agent will try to pull from the low_q queue.

To make sure an agent pulls from all queues equally, add the --order-fairness flag.

It will make sure the agent will pull from the group_a queue, then from group_b, then back to group_a, etc. This ensures that group_a or group_b will not be able to starve one another of resources.

ClearML Agent can also execute specific tasks directly, without listening to a queue.

Execute a Task without Queue#

Execute a Task with a clearml-agent worker without a queue.

Clone a Task and Execute the Cloned Task#

Clone the specified Task and execute the cloned Task with a clearml-agent worker without a queue.

Execute Task inside a Docker#

Execute a Task with a clearml-agent worker using a Docker container without a queue.

By default, ClearML Agent works in PIP Mode, in which it uses pip as the package manager. When ClearML runs, it will create a virtual environment (or reuse an existing one, see here). Task dependencies (Python packages) will be installed in the virtual environment.

This mode is similar to the PIP mode but uses Conda as the package manager. To enable Conda mode, edit the clearml.conf file, and modify the type: pip to type: conda in the “package_manager” section. If extra conda channels are needed, look for “conda_channels” under “package_manager”, and add the missing channel.

This mode is similar to the PIP mode but uses Poetry as the package manager. To enable Poetry mode, edit the clearml.conf file, and modify the type: pip to type: poetry in the “package_manager” section.

Some versions of poetry (using install-poetry.py) do not respect pyenv global.
If you are using pyenv to control the environment where you use ClearML Agent, you can:

When executing the ClearML Agent in Docker mode, it will:

ClearML Agent uses the provided default Docker container, which can be overridden from the UI.

All ClearML Agent flags (such as --gpus and --foreground) are applicable to Docker mode as well.

For Kubernetes, specify a host mount on the daemon host. Do not use the host mount inside the Docker container. Set the environment variable CLEARML_AGENT_K8S_HOST_MOUNT. For example:

By default, ClearML uses the package manager's environment caching. This means that even if no new packages need to be installed, checking the list of packages can take a long time.

ClearML has a virtual environment reuse mechanism which, when enabled, allows using environments as-is without resolving installed packages. This means that when executing multiple experiments with the same package dependencies, the same environment will be used.

To enable environment reuse, modify the clearml.conf file and unmark the venvs_cache section.

This feature is available under the ClearML Enterprise plan

The ClearML Enterprise server supports dynamic allocation of GPUs based on queue properties. Agents can spin multiple Tasks from different queues based on the number of GPUs the queue needs.

dynamic-gpus enables dynamic allocation of GPUs based on queue properties. To configure the number of GPUs for a queue, use the --queue flag and specify the queue name and number of GPUs:

An agent can be spun on multiple GPUs (e.g. 8 GPUs, --gpus 0-7), and then attached to multiple queues that are configured to run with a certain amount of resources:

Another option for allocating GPUs:

ClearML Agent supports a Services Mode where, as soon as a task is launched off of its queue, the agent moves on to the next task without waiting for the previous one to complete. This mode is intended for running resource-sparse tasks that are usually idling, such as periodic cleanup services or a pipeline controller.

To run a clearml-agent in services mode, run:

Launch a service task like any other task, by enqueuing it to the appropriate queue.

Do not enqueue training or inference tasks into the services queue. They will put an unnecessary load on the server.

Self hosted ClearML Server comes by default with a services queue. By default, the server is open and does not require username and password, but it can be password-protected. In case it is password-protected, the services agent will need to be configured with server credentials (associated with a user).

To do that, set these environment variables on the ClearML Server machine with the appropriate credentials:

Exporting a Task into a Standalone Docker Container#

Build a Docker container that when launched executes a specific experiment, or a clone (copy) of that experiment.

Build a Docker container according to the execution environment of a specific Task.

It's possible to add the Docker container as the base Docker image to a Task (experiment), using one of the following methods:

ClearML Agent can run on a Google Colab instance. This helps users to leverage compute resources provided by Google Colab and send experiments for execution on it.

Check out this tutorial on how to run a ClearML Agent on Google Colab!

This feature is available under the ClearML Enterprise plan

Set a schedule for a worker from the command line when running clearml-agent. Two properties enable setting working hours:

Define uptime or downtime as "<hours> <days>", where:

Use - for a span, and , to separate individual values. To span before midnight to after midnight, use two spans.

Set a schedule for a worker using configuration file options. The options are:

Use the same time span format for days and hours as is used in the command line.

For example, set a worker's schedule from 5 PM to 8 PM on Sunday through Tuesday, and 1 PM to 10 PM on Wednesday.

Currently, these runtime properties can only be set using an ClearML REST API call to the workers.set_runtime_properties endpoint, as follows:

For example, to force a worker on for 24 hours:

Currently, you can set queue tags using an ClearML REST API call to the queues.update endpoint, or the APIClient. The body of the call must contain the queue-id and the tags to add.

For example, force workers on for a queue using the APIClient:

Or, force workers on for a queue using the REST API: